The way you saw that dress, what a mess, I confess: A cognitive psychologist sees a dress

The internet was finally broken yesterday, not by a West or a Kardashian, nor by Beliebers, but rather by disbelievers. #TheDress, in which some people see blue/black, some people see white/gold, some people see blue/gold, and some people, no … seriously? It’s blue and black. How could you? Are your eyes working ok? The disbelief is how different humans could see the same thing something as straightforward as a picture of a dress in such remarkably different ways. I’m pretty happy to have played a small role.

The journalists of the internet (and everyone else) frantically searched for experts who could tell them why this was (i.e.: why they were right about the dress, and why their spouse was horribly horribly wrong).  I think this is a great lens to see some important disconnects between science and the public. But first I’ll explain a bit of what scientists know about the dress.

Perception is a way more complex process than most people realize. Whenever you see the color of anything, you have to judge the color of the surface as well as the color of the light. We walk around mostly aware of the colors of surfaces, but in fact, our eyes are always deciding where the illumination is coming from, as well as what color and how bright it is. Our brains do this effortlessly, as in the famous Adelson checkershadow illusion below: 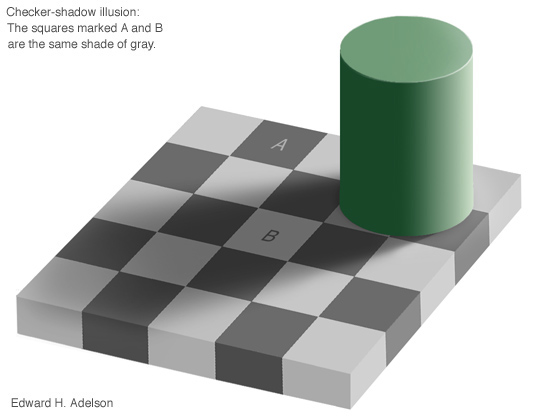 See here for how to check that those two squares are the same color gray. 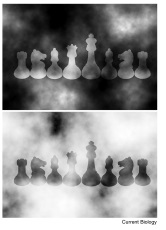 Both sets of chess pieces are the same, because we see white pieces under black clouds in the top figure, but black figures under white clouds in the bottom figure. Not only are we deciding what kind of light hits the pieces, and how reflective the pieces themselves are, but we are also deciding what that light does between the chess pieces and our eyes. In other words, from one set of color values (what gets into our eyes) we are reconstructing a rich set of layers of light, surfaces and media.

So that tells us how we perceive color in general, but it doesn’t answer the particular question in front of us. Why do some people see the dress one way and others another way? Believe it or not, most perceptual scientists I’ve seen reacting mostly shrug. We know contrast can matter, we know it matters what you saw before, we know the angle of your screen matters, we know where you look first can matter. But why do you see this particular dress this way and other people see it differently? For that, many of us are often fine to chalk it up to some element of randomness. Some people see white/gold some people see blue black and some people flip. We are happy to do this because this image, like many similar illusions, sits on a fine edge between two perceptual interpretations. We perceptual psychologists are perfectly fine with this, because we accept the idea that the process of perception results in likely interpretations, not in a perfect mirror of reality. For people who know that perception is often a process of judgment and interpretation, it is not surprising when people see differently. For those who think they see reality, the idea that there are two realities is pretty mind-blowing. But for vision scientists, that’s old news. In fact, the point is not that there are two realities, or even that there is one (the dress is blue and black under most illuminations) but there are two interpretations of the same reality, which supports each of those interpretations.

So, there is a mismatch between scientists who are happy to try to explain the general case (how do we judge the relative colors and brightness of surfaces under different illumination) but shrug at the particulars and many fascinated dress viewers who shrug at the general (luminosity? isn’t that a brain training site?) but want to know why they see it the way that they do but their friend doesn’t (he has blue eyes maybe?)  But there is also a mismatch between scientists and the public (and even between scientists of different fields) on what constitutes an explanation.

Notice I haven’t mentioned anything about the physics of light or biology of the eye or brain yet. To me, the correct way of explaining our perception of this dress need not refer to the wavelengths of light, or our different cones, or color opponent processes in the retina or color processing in the visual cortex, but to the features of this image and how our visual system as a whole interprets it. You can explain many illusions without reference to particular neurons. Indeed, many other illusions, even the Hermann grid, might seem to be simple consequences of how our neurons are organized, instead turn out to be too complex to explain with neurons, leaving us just saying “we see it this way in this situation and this other way in this other situation.” Yes, my thinking is informed by visual neuroscience, but I know enough to know that we don’t have a neuroscientific understanding of these kinds of illusions, we have a much better psychological explanation.

I know I shouldn’t be, but the ubiquity of neuroscientific terms despite the paucity of neuroscientific explanations is why I am a bit grumpy when I read that “this is all about our brains.” Of course it is: everything is made of atoms too, but that doesn’t make me turn to a physicist to explain why cake is delicious.  That our brains help us see doesn’t get us any closer to understanding the mechanism of this kind of illusion. Neuroscience doesn’t predict that if you focus in a different part of the scene, or adjust the contrast that might flip your perception of the dress. Perceptual psychology does. Alan Gilchrist was trained as a psychologist. Edward Adelson was trained as a psychologist. Bart Anderson, the lead author on that chess piece illusion paper, is also a psychologist, whose expertise on perceptual processes helps him explore illusions in human perception, but also consulting on perception and illusions in other animals, such as in the case of the fascinating architectural craftsmanship of bowerbirds.

Why do I care? Why can’t I just let the brainy goodness wash over me and bathe in its credibility-inducing glow? Because high expectations of neuroscience and low expectations of psychology have real world consequences. When people like Tom Coburn wants to get rid of social and behavioral science at the National Science Foundation, he wants to to get rid of psychology but keep neuroscience. Ultimately, this will not just undermine our understanding of dresses, but of many other situations where psychology is a better guide than neuroscience, like eyewitness testimony, or prejudice or health behavior. So, next time you are interested in a mental or perceptual phenomenon, ask a cognitive psychologist (and don’t be afraid to label them as such). Our brains will thank you.

*Correction: an earlier version of this post incorrectly attributed the chesspiece illusion to Gilchrist. Check out Bart Anderson’s webpage for many more great demos and illusions.

This entry was posted in psychology, science and tagged color, perception, thedress. Bookmark the permalink.

3 Responses to The way you saw that dress, what a mess, I confess: A cognitive psychologist sees a dress